Plant a tree in memory of Edna
An environmentally-friendly option 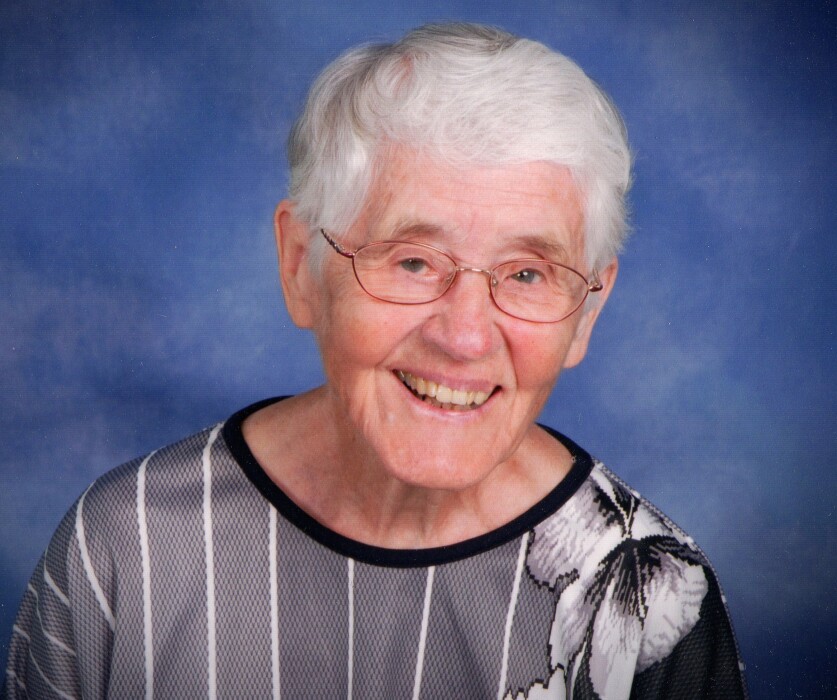 Chris was a 1944 graduate of Academy High School in Erie.  She furthered her education earning a Master’s Degree in Education from Atlantic Union College in South Lancaster, Massachusetts in 1949.

While serving as a teacher in Africa she met her future husband Dale Eugene Fairchild, and they were married May 1, 1955 in Gwelo, Zimbabwe.

Chris was a much loved and respected school teacher.  She taught at a number of schools including Greater Pittsburgh Junior Academy in Pittsburgh, Pennsylvania; the Adventist school system in Zimbabwe, Africa; Lake Erie Junior Academy in Erie, Pennsylvania, and in the Erie County Public School System.  Following retirement, she continued her passion for teaching by volunteering as a tutor in the Kingsville, Missouri R-I School district.  She was passionate about teaching and was always there to support the underdog.  She never gave up on a student and was adamant in educating them with love.  She described herself as “tough as nails, but all my students know I love them!”

Chris was a member of the Kingsville Seventh-Day Adventist Church.  She enjoyed stamp collecting, old books, and spending time with her family.

Chris was preceded in death by her parents, eight siblings, and daughter, Betty J. “Biz” Reynolds.

She is survived by her husband Dale of the home; her son and daughter-in-law, David and Darlene Fairchild of Shawnee, Kansas; five grandchildren, Beckie Fairchild of Branson, Missouri; Rindy Fairchild, of Bentonville, Arkansas; Christopher (and Shana) Fairchild of Ooltewah, Tennessee; Rob Reynolds of Pleasant Hill; and Kevin Reynolds of Lincoln, Nebraska; as well as other relative and friends.

Cremation has been accorded.

A celebration of Chris’ life will be held at a later date.

Memorial contributions are suggested to Harvesters or ADRA – Adventist Development and Relief, and may be sent in care of the funeral home.

Online condolences may be sent to the family at www.stanleydickeyfuneralhome.com

Plant a tree in memory of Edna by clicking here.
To send flowers to Edna's family, please visit our floral store.

A service summary is not available

Plant a tree in memory of Edna
An environmentally-friendly option

Plant a tree in memory of Edna

10 trees planted in memory of Edna

She was a loving daughter, sister, wife, mother, aunt, and teacher. A woman of faith who made each of us feel special. Aunt Sis, we will miss you and your gentle teasing spirit. Rest with our Lord.


A Grove of 5 Memorial Trees was planted in memory of Edna M. Fairchild

Mrs. Fairchild will always be in our hearts and lovingly remembered. She was a big part of our lives as our teacher, neighbor and friend. Always had a smile and a positive attitude and a hug!
The Moyer Girls, Debi Jones, Diane Pondel & Dana Kosiorek


A Grove of 3 Memorial Trees was planted in memory of Edna M. Fairchild

I am saddened to hear the news of Mrs. Fairchild's passing. I have fond memories of her teaching my twin sister and I at Lake Erie Junior Academy. I remember Sabbath afternoons at her home playing games with her and Mr. Fairchild, these memories and many more have been shared and never forgotten. My condolences and respect to Mr. Fairchild, family and friends.

In memory of Mrs. Fairchild, who taught my brothers, myself, and so many others so much more than just words and numbers.
John H Love IV

A Memorial Tree was ordered in memory of Edna M. Fairchild by John H Love IV.  Plant a Tree

Uncle Dale, David, and Family,
I'm very sorry to hear of the passing of Aunt Sis..Ive shared so many letters over the years with her..she meant so much to me..always had an encouraging word..her letters over flowed love..miles apart never mattered..from the time I was a little girl, I was her "Miss Suzie Q"..that never changed..all the way into my 40's!! She was 1 of a kind..extremely grounded and level headed..an innocent...they dont make em like that anymore..I will miss our conversations and her photos..I loved her very much...Your family and Uncle Dale are in my prayers and I'm sending hugs!!! Love you's!

Plant a tree in memory of Edna